These are some of the words used by people who visit Dubois County Park.

It’s what he likes most about camping at the park with his wife, Carol.

“Basically, it’s quiet and peaceful out there,” he said. “It’s a way to get away from the every day, the work at home, the home phone.”

The 144-acre park just west of State Road 162 and north of State Road 64 is utilized by visitors for different activities, such as walking one of the several trails at the park; pitching a tent or pulling a camper into one of the campsites to stay overnight; or enjoying a picnic with family and friends, and ending with a round of Frisbee golf. Visitors can even gaze at the lake to relax and clear the mind.

Dubois County Park and its park board are celebrating the park’s 50th anniversary this year. It’s been 50 years of creating a tranquil area where people can escape the hustle and bustle of traffic and crowds. It’s the muted, calming stillness nestled between the trees and hills that invite people to spend time at the park. 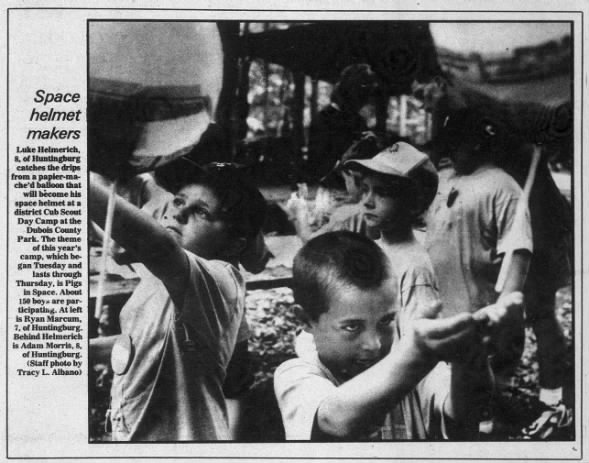 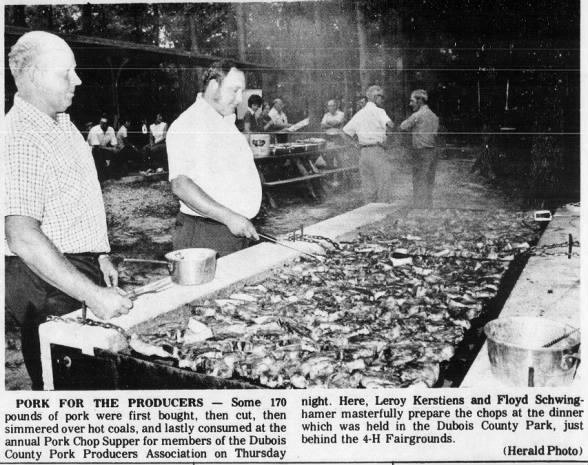 Today’s park started as plans in October 1969, when leases between the Dubois County Commissioners and the Dubois County Park and Recreation Board were signed to designate 44 acres of land to be used as park. Dubois County Park started with 100 picnic tables, 47 grills, 24 campsites with electricity and water, a sanitary sewer dumping station, two restroom buildings, a barbecue pit, four shelter houses, playground equipment and drinking fountains. The park board submitted its first park and recreation plan to the Indiana Department of Natural Resources in 1974.

Various improvements have been made over the years.

In 1976, work was done to pave the park entrance road, construct two basketball goals and purchase playground equipment. In 1977, 20 primitive campsites were added, and two lighted tennis courts were constructed. Fifty-two trees were purchased and planted in 1978. Two restroom buildings and hot-water showers were added in the late 1970s. Restrooms were renovated in the early 1980s and 75 oak trees were planted in 1984.

Between 1986 and 1989, an additional 50 acres were purchased and added to the park. In 1986, the park board negotiated with its nearby neighbor, the Dubois County 4-H Council, to share land. The result of this is the park board building, a softball field on property leased by the 4-H council and the 4-H council sharing a two-acre parking lot that was built in 1989 with the park board. Also that year, 25 picnic tables were built, a junk- and garbage-hauling wagon was bought, and a 42-by-60 maintenance building shared by the park board and council was constructed.

Between 1996 and 1997, work was done to add various features to the newest 50 acres of land. That project resulted in the park having a lake, trails, two footbridges, fishing pier, fishing platform, small boat launching ramp, wetland area, wetland trail and boardwalk, security lights, landscaping, and interpretive signs along the trail. In 1998, the playground equipment was updated and interpretive signs were added around the new lake, which was stocked with fish.

With the help of local high school agricultural/woodworking classes, 50 new picnic tables were constructed and added to the park between 1999 and 2000. In 2004, a new access road from State Road 162 was constructed, and a new restroom was built near the campsites. The Our Precious Angels memorial was constructed in 2005, with the park’s blessing. The memorial is dedicated to children who died young, and is a place families and friends can go to reflect and remember. It is tucked into a space surrounded by trees and greenery, and its access path is near the new lake.

In September 2008, the park was damaged by a storm; debris was removed and shelter houses were repaired. In 2011, 40 acres of land were purchased for the park, and another 10 acres were added in 2012. The disc golf course was completed in 2012.

Gary Meyerholtz likes playing disc golf while he and Carol camp there in their RV. They also enjoy having contained campfires on cool nights, walking along the trails and visiting other campers.

“Some of them are the same people over and over,” Gary said, “so you get to know them.”

“It’s very family-friendly,” Carol added. “You can let the kids play. They can ride their bikes, and you don’t worry about them getting hit by traffic.”

But it’s the peacefulness that really attracts them to the park. And they camp as often as they can during camping season, which typically runs from April 1 to Nov. 1.

“We like to get away from the house,” Carol said, referring to their farmhouse on the west side of Huntingburg. “I’m recovering from surgery. And if I was at home, I’d be more apt to do work around there. And we have stairs to climb.”

They also said the park staff is very helpful.

“(Park Superintendent) Bob (Gress) is so nice,” Gary said. “He takes great care of this place. It’s a wonderful park, and Bob works hard to keep it that way.”

Kenny and Judy Lampkin also like to walk in the park, which they live next to. “It’s just easy to go out our back door and take a walk,” Kenny said, adding that walking up the hills is great exercise.

“We like to go around the lake in the back, and then we’ll go in the park where the campgrounds are to make a lap,” he said. “It helps to get the heart rate up more by going up and down the hills.

They also enjoy the serenity of the park.

“It’s a very peaceful walk because it’s so quiet back there’” Kenny said. “You don’t hear traffic or any of that stuff. Even when the campers are there, it’s quiet.”

Dubois County Park’s future includes plans for many improvements to enhance people’s enjoyment of the land. But that will take years, likely more than a decade, to complete.

“We have a really great park. But we want to keep it relevant,” said Christine Prior, president of the park board. “For example, we have tennis courts that we’ve observed aren’t being used very often. So should we replace those? We find that trails, so that people can get out and move, are important. And we want to make sure that the trails are different types of trails.

“That’s some of what we’re looking at with our future.” 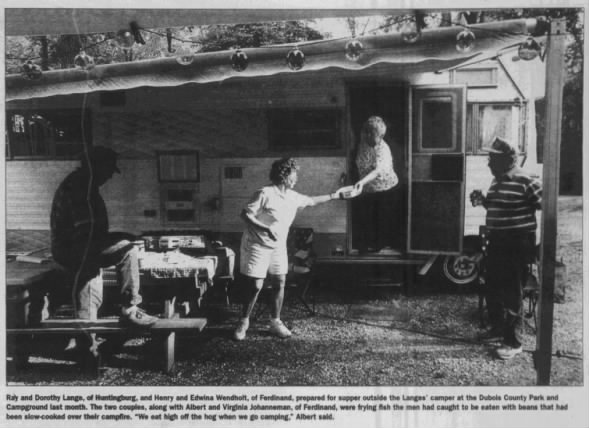 The park board is planning to start some of that work soon. In the past two years, the board completed a master plan for park improvements. Using a state grant and local match money from its coffers, construction on the first phase of those improvements — more campsites, a new restroom building, trail extensions and parking improvements — is expected to happen next year.

The master plan has many other features, such as the addition of trails and a bike trail, a centralized playground area, more RV campsites and a more defined tent campsite, and more picnic tables scattered throughout the park.

Another change in the near future is the elimination of the park lease between the county and park board. Instead, the county will enact an agreement that will keep the land as a park in perpetuity.

So the Dubois County Park will never be eliminated. It will always be there for those who enjoy being in nature.

“We know that people are wanting a good quality of life. And that includes being able to get out,” Prior said. “We’re trying to make sure there are areas that are better defined for the different activities people may want to do.”

Celebration Planned
The Dubois County Park will celebrate its 50th anniversary with a party from 1 to 3 p.m. Sunday, Oct. 27, at the main shelter house. The public is invited to stop by for refreshments, and to walk the trails and hear about the park and its future.

Click here to learn more about The Herald's online archive.