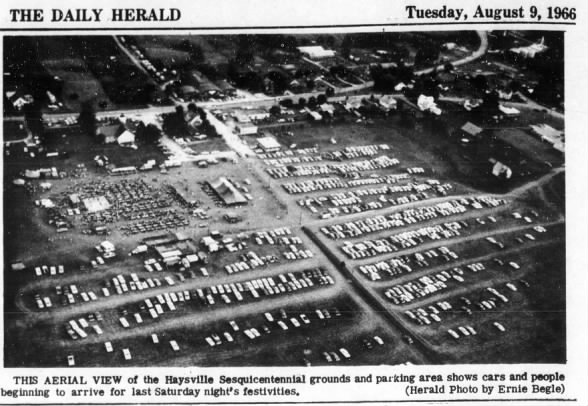 JASPER — Long-time newspaperman and photographer Ernie Begle is being remembered for more than a half-century of extremely skilled and versatile work at The Herald.

Begle, 82, who passed away Monday in Jasper, was also a noted local wedding photographer. Newspaper folks and local photographers were among the throng attending his visitation Wednesday. Some of his cameras were set out on tables ringing the parlor at the Becher-Kluesner North Chapel in Jasper.

Retired Herald co-publisher John Rumbach says Begle was already a jack-of-all trades in the production department when he joined the family business.

“He manned the production camera, processed and printed film, helped run the press when needed and took the bulk of the photographs, among other things,” Rumbach remembers.

In the days before The Herald had full-time photographers, Begle was on call 24/7.

“Ernie was as dedicated to photographing important community events as he was to the community newspaper,” Rumbach said. “He knew that getting your picture in the paper was an important event for the subjects he was photographing.”

Rumbach credits Begle with helping make the newspaper an integral part of the community as he took thousands of sports, news, feature and group photos during his long career at The Herald.

On St. Patrick’s Day in 1960, Northwest Orient Airlines Flight 710 crashed near Cannelton. Begle, who had just finished a U.S. Army Reservists meeting that evening, was dispatched to the scene by then-publisher and editor Jack Rumbach.

The flight was heading from Minneapolis-St. Paul to Miami when it crashed, killing the 57 passengers and six crew members on board. In a story 50 years later, Begle recalled the spooky sight of debris in the trees as he hiked to the crater.

Begle, who captured images and wrote a first-person account, called it the biggest assignment in a 51-year career. 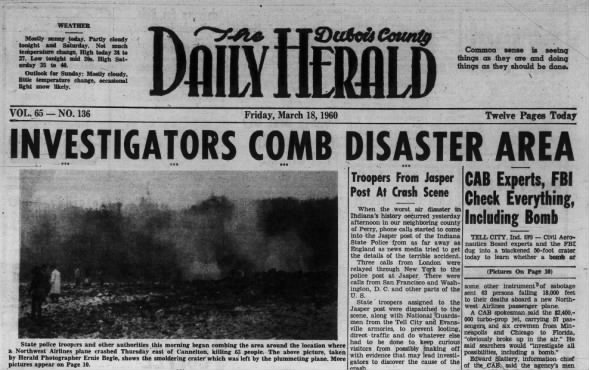 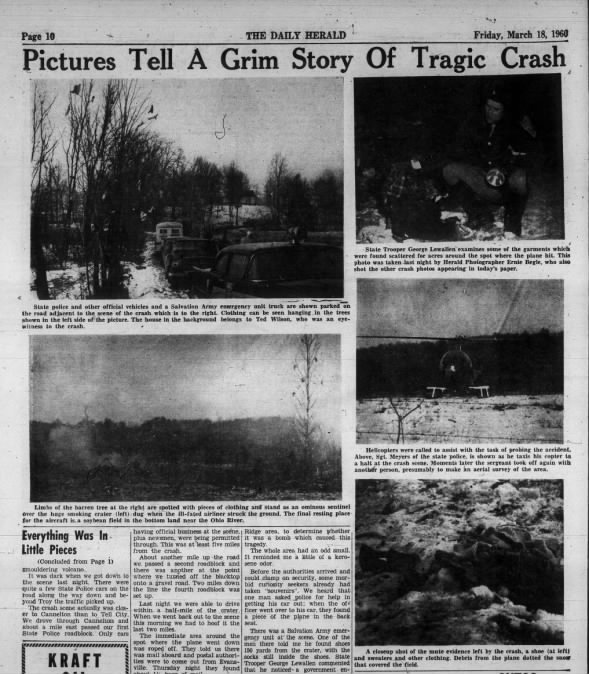 Fri, Mar 18, 1960 – 10 · The Herald (Jasper, Indiana) · Newspapers.com
He first arrived at The Herald as a seventh-grader, taking a job stapling ticket booklets for a local bazaar at a time when members of the newsroom understood the term “hot type.” He started full time in 1951, where a day’s work could include helping unload massive, 900-pound rolls of newsprint. He would head back out at night to take pictures at sporting events.

He retired at the end of 2002 after having continually adapted in decades during which the publishing business underwent dramatic changes.

Former Herald production manager Earl Epple, 83, of Jasper, who ended up working more years at The Herald than any employee in company history, said Begle started at the paper a couple of years before him.

Friends and co-workers like Epple cast Begle as a big, quick-witted, larger-than-life character with buzz-cut hair and a passion for pranks. Anyone momentarily walking away from their lunch might return to find it spiced up with horseradish or hot sauce when Begle was in the building.

“There was a lot of practical joking going on back in those days,” Epple says. “Between Ernie, myself and (late pressman and Jasper Fire Chief) Denny Hasenour, we put a few grey hairs in Jack (Rumbach) and Ed’s (former co-publisher Ed Rumbach’s) heads.”

Former pressman Andy Foll said Begle once had a woman dress as a clown and deliver balloons to him on his birthday in the middle of a press run.

Foll says Begle specialized in doctoring the beers of unsuspecting victims with the juice from small, hot peppers he’d grown. He once had to fess up to the prank at a local tavern when a steamed customer insisted the bartender call the police.

Begle enjoyed the outdoors, was sometimes credited as Herald Wildlife Photographer, and once had a four-hour ice fishing foray Foll remembers when no fish were caught, but “the beers in our coveralls were froze and the wine was slushy.”

Once, Begle asked Foll to assist on one of his aerial shoots of Jasper factories for The Herald, with Foll tasked with handing Begle his change of camera lenses.

“When I got there,” Foll says, “they had the doors of the plane off. The pilot would angle down so he could take pictures, and Ernie was hanging out of the plane.

“Honest to God, I almost got sick. I was holding on for dear life. I wasn’t going to tell him, though, because he would’ve told the pilot to go upside down or do somersaults.”

Begle’s survivors include his wife of 60 years — the former Marilyn Fetcher — a daughter and three sons, 11 grandchildren and four great-grandchildren.